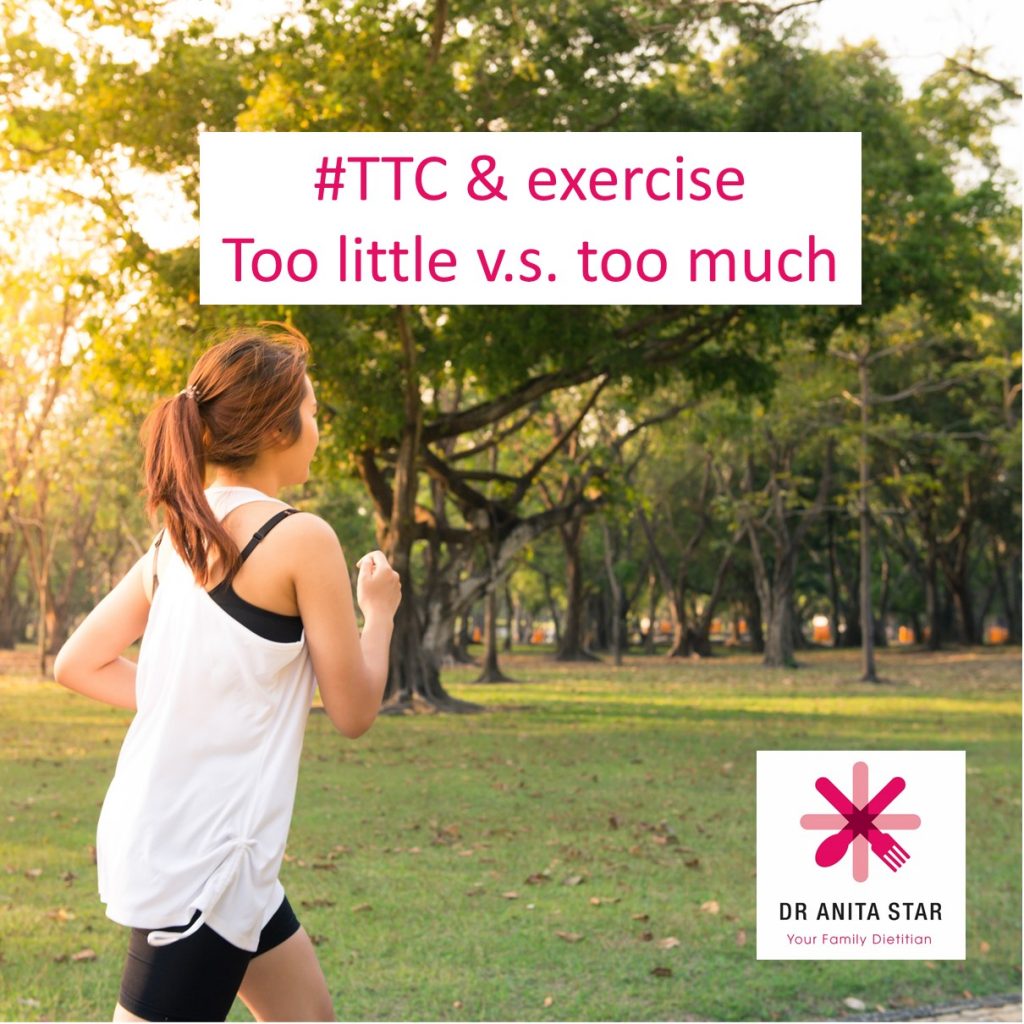 30 Dec#TTC and exercise: Too little v.s. too much

Setting a New Year’s resolutions about getting your body fit, doing lots of exercise and becoming healthy in order to maximise your fertility? Wooooooooo- up girlfriend. Let’s arm you with some information first.

There is such a thing as too much exercise, and of course there is also a problem of too little. The tricky thing is, different bodies respond differently to exercise, and the relationship between exercise and fertility is very complex. I am going to talk you through some different research studies and then I would strongly recommend you talk through advice specific to your individual circumstances with your doctor or fertility specialist.

Ok so in the first study was from women in the general community. It involved a 10 year follow up study of around 3800 women from the general population in Norway (Gudmundsdottir et al).  After controlling for other factors affecting fertility (age, number of pregnancies, education, alcohol consumption, marital status, education, and it also considered BMI in a separate analysis) their findings included.

The next couple of studies focused on women undergoing assisted reproductive technology.

The next study (morris) was of around 2000 patients undergoing IVF in the USA. In this study they looked at the relationship between exercise and outcomes including cycle cancelation, failed fertilisation, implantation failure, pregnancy loss and successful live birth. The study did also take into account other variables which may impact upon pregnancy outcomes including, BMI, use of alcohol, caffeine, and tobacco.  There were some complex findings specifically

So it is quite a complex picture. There are benefits to regular low to moderate activity on your fertility outcomes, particularly if you are overweight.  However, there are also negative consequences of doing too much exercise. And, if you are an exerciser, the bar for what is considered too much exercise in these studies is actually set pretty low; that is relative to what I know many active women do each week. So have a think through all of this and have a chat with your doctor, you may need to do some more exercise, or you may need to do less, depending on your circumstances. If you have been struggling for a while with fertility issues, you could alter your current approach to exercise, to see if that makes a difference.

Take care everyone. For all who are #TTC, wishing you lots of baby dust, prayers and all the goodness of Mother Nature in 2018.