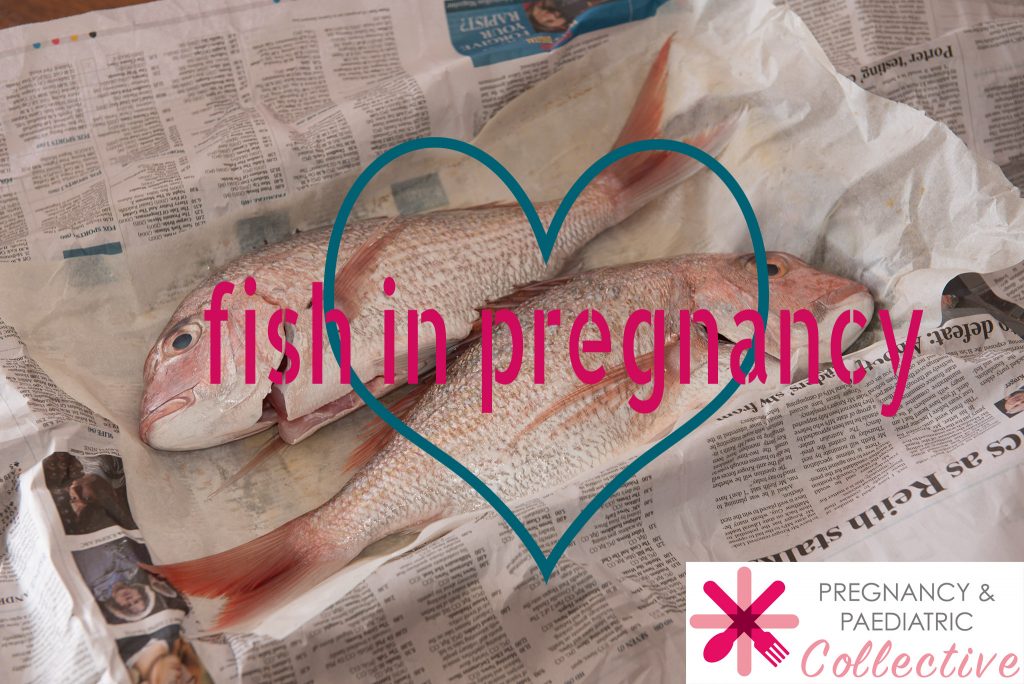 Yes that is right we love fish in pregnancy!

Benefits of fish in pregnancy

So make sure you get some low mercury fish as a part of your shopping trolley.

Can I just have a supplement?

Which fish do I need to avoid?

Also be aware of the following tips

When living or traveling in New Zealand avoid fish from lakes or rivers supplied from geothermal water, as mercury is commonly found in volcanic emissions and can build up in fish swimming in these waters.

Avoid buying fish caught in heavily polluted Asian waterways. There is quite a bit of this in the Australian market.

We recommend buying Australian and New Zealand caught or grown fish, as mercury content of Australian ocean fish other than the large predatory fish is mostly quite low.

If you are travelling outside of Australia we recommend seeking the local advice on mercury content of fish. The names of fish can change in each region. Also different fishing grounds in other regions of the world have different levels of mercury,  which will impact on the types of fish which are safe or which you need to avoid in that region.

Raw or smoked fish should also be avoided for potential unsafe bacterial contamination.

If you accidentally eat one of these higher mercury fish when pregnant, simply avoid all other fish for 2 weeks.

If you have eaten a lot of high mercury fish pre-pregnancy discuss it with your doctor.

Avoiding fish types high in mercury is also important for kids up to 6 years of age. Again fish consumption once your child has started solids if extremely healthy for their ongoing brain development and mental health, but knowledge in selecting options low in Mercury is important.

We need to clean up our oceans, rivers and lakes

Mercury is a heavy metal toxin mainly caused by various industries including the mining industry and coal powered power plants. It stays in our environment for a very long time and fish can absorb it. Longer living fish, large predatory fish (that eat smaller fish with smaller amounts of mercury, which then build up in the larger fishes system), and fish that live in heavily polluted water ways, have the highest mercury levels. Mercury is toxic for the environment and toxic for us. I think greater effort needs to made to clean up industrial pollutants. As mercury lasts so long in the environment, pollution created many years ago, before perhaps our current environmental standards, are still impacting on the environment and us.

We are extremely fortunate in Australia and New Zealand to have some great tasting, low mercury fish options. Please talk to yor doctor about eating up to 3 X 150mg serves of low mercury fish per week to get the health benefits of fish during pregnancy.

Julvez, Jordi, et al. “Maternal consumption of seafood in pregnancy and child neuropsychological development: a longitudinal study based on a population with high consumption levels.” American journal of epidemiology 183.3 (2016): 169-182.

Strain, J. J., et al. “Prenatal exposure to methyl mercury from fish consumption and polyunsaturated fatty acids: associations with child development at 20 mo of age in an observational study in the Republic of Seychelles.” The American journal of clinical nutrition 101.3 (2015): 530-537.

Department of Health and Human Services, State Govt. of Victoria. Mercury in Fish (website accessed May 2017)