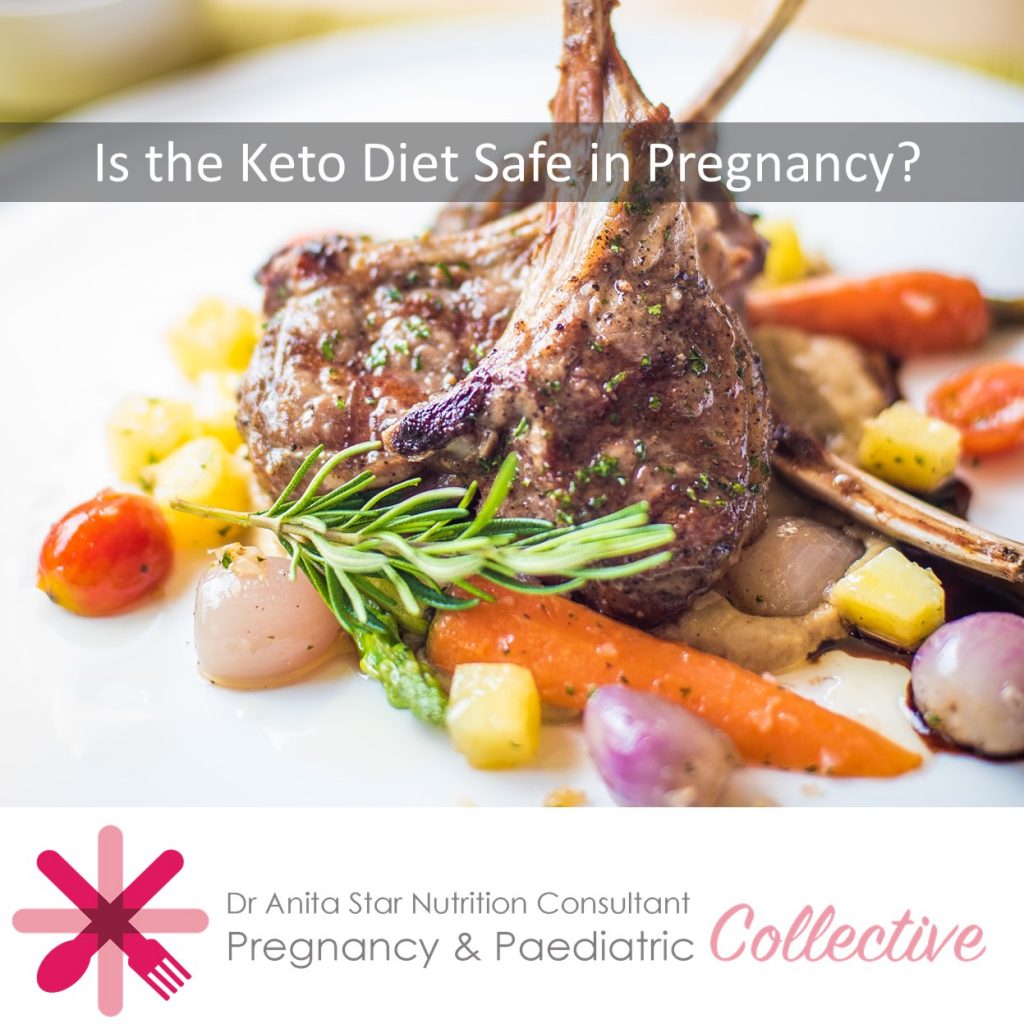 The popularity of the keto diet for weight management is at an all time high in the community, and some people are getting good results in the short term. But is the keto diet safe if you are pregnant, or actively trying to get pregnant?

As for Keto there is no research indicating the safety or otherwise of the keto diet in human pregnancy. But there is strong the theoretical reasons and animal studies that indicate following a keto diet when pregnant or if actively trying to become pregnant could cause major harm, mainly in terms of outcomes for the unborn child.

First up is the concerns for nutritional adequacy and the dire consequences of inadequate intake of nutrition on the unborn baby. The level of restriction of carbs in the typical keto diet is severe- two pieces of fruit would typically see you meet or exceed your limit. But carbohydrates are found in many healthful foods, we have already mentioned fruit, but also milk and milk alternatives, vegetables- most people think of potato, sweet potato and corn when they consider high carb veggies, but to achieve the very low level of carbs recommended in these keto diets, many followers are also restricting foods such as carrot, beetroot, parsnip, pumpkin, peas, and others, then there is obviously grain and grain foods, including low GI nourishing whole grains such as quinoa, chia seeds, oats and barley; as well as lentils, legumes and beans, and even nuts have some carbohydrate. These foods contribute to an enormous range of micronutrients and fibre for the body. And when you don’t supply your unborn baby with a balanced diet with the full range nutrients you are placing them at increased risk of developing a range of birth deformities, disabilities, decreased cognitive capacity, and increased risk of behavioural and mental health issues in the longer term. This is not something to muck around with!!!!! A recent study in the USA has already pointed to increased prevalence to neural tube defects which has been linked to the rising popularity of low carb diets in the community. Other researchers have found excessive dietary restriction, and weight loss in pregnancy has is linked to miscarriage, small for gestational age babies, and preterm birth.

Evidence from animal models in mice and rats that show a keto diet is linked with some pretty horrible outcomes. Specifically retarded growth, changed structure and relative size of various components of the brain, and decreased size of other organs in the body occurred when the mums were fed a ketogenic diet in pregnancy, compared to those whom had a mother fed a standard diet. Additionally one of the mice studies followed the mice to adulthood, those who had been exposed to a keto diet in-utero where more likely to exhibit anxiety and depression. Now humans are not mice or rats but animals models have been used in science and medicine for many years, for a very good reason- ideas for new treatments are tested in animals, and it is not until they are found safe in this environment that they can then be tested in humans. Another study which looked at diet restriction in-utero (not specifically keto) and effects of adults rats, it also showed increased tendency to anxiety and also increased weight gain and fat stores. At this stage of nutritional science it would be completely unethical to study the effects of the keto diet in human pregnancy, when the outcomes in animals have been so dire.

The effect of the restrictive diet in-utero on adult rat metabolism reminds me of the effect of generalised malnutrition during human pregnancy. There is lots of research on the Barker Hypothesis, which shows malnutrition in-utero and small birth size (as has occurred in various famines due to war or poverty), is associated with numerous adult ‘lifestyle’ diseases in the offspring including increased obesity, type 2 diabetes and cardiovascular disease. Given the restrictions imposed on the keto diet, I think it would be common for women following these diets to not meet their caloric needs in pregnancy, and they may not gain the correct amount of weight recommended based on their pre pregnancy BMI. It seems the balance between under and over nutrition is important, with both side of this continuum in pregnancy linked to poor birth outcomes and longer term health outcomes for the offspring.

So what do you do if you have been following a keto type diet, for weight loss or management of conditions like PCOS and you now want to become pregnant?  You maybe even a little bit scared of eating a full range of carbohydrates again, given the benefits you have found your body on this diet? It’s tricky I know, but I think the potential for harm to your baby, outweigh any benefits you have seen in your own body to date. But don’t stress, NO ONE is going to tell you to get stuck back into the sugar and refined white baked goods. I think it is best to talk to your doctor and a clinical dietitian to help you make some changes to your diet to ensure nutritional adequacy for (fingers crossed) your soon to be baby, and work on finding a more balanced diet which will still work in managing your own health conditions. I think the focus would be on gradually re-introducing high quality, low GI, unrefined carbohydrates, and completing nutritional screening tests to ensure your body is ready to carry a pregnancy before you try to conceive.

Kapadia, Mufiza Zia, et al. “Weight loss instead of weight gain within the guidelines in obese women during pregnancy: a systematic review and meta-analyses of maternal and infant outcomes.” PloS one 10.7 (2015): e0132650.

Sussman, Dafna, et al. “Effects of a ketogenic diet during pregnancy on embryonic growth in the mouse.” BMC pregnancy and childbirth 13.1 (2013): 109.